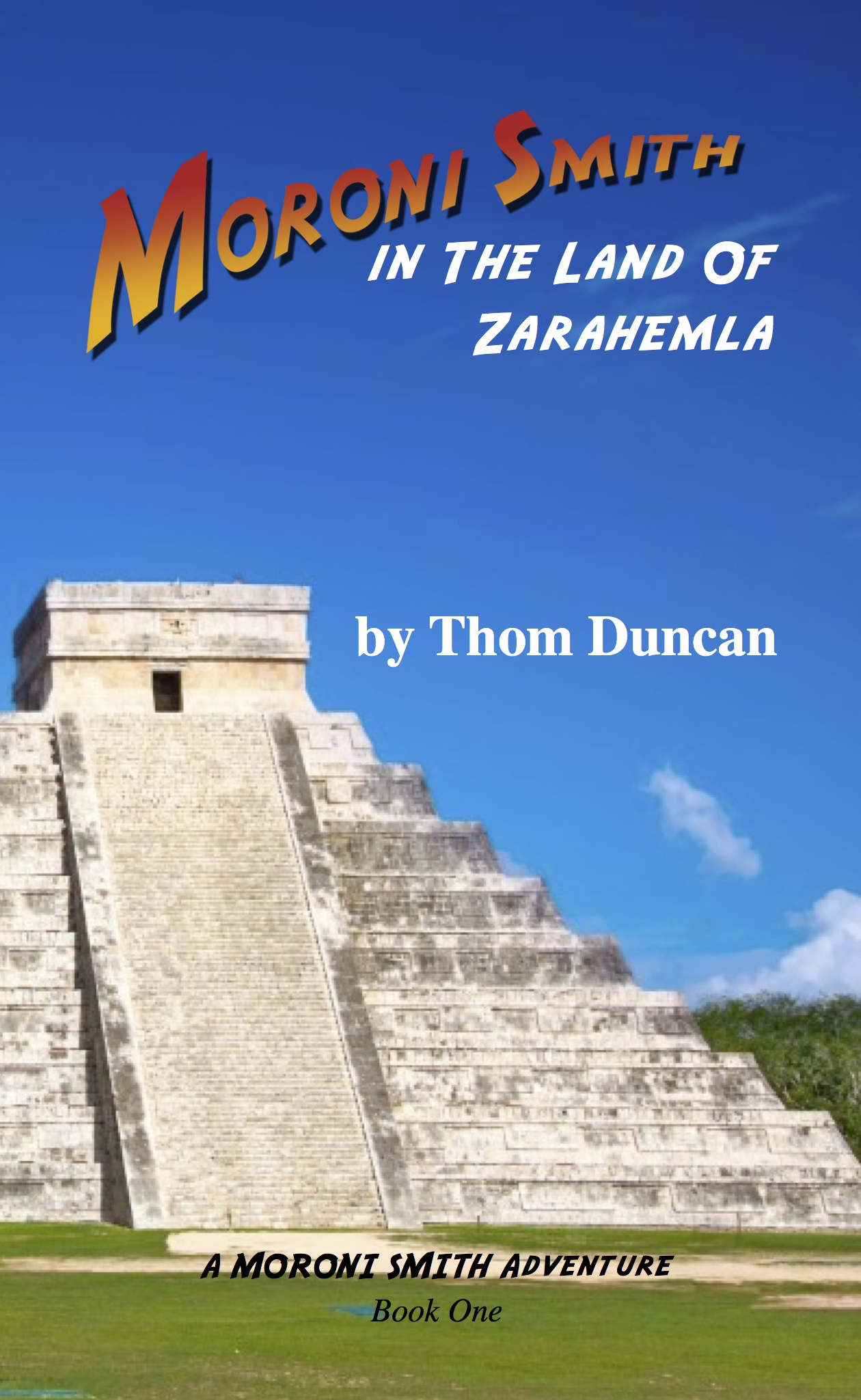 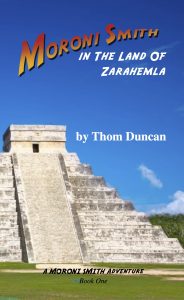 Book One of the Moroni Smith Adventures SERIES

Who wouldn’t want to find the location of the lost civilizations of the Book of Mormon? Someone!

Dr. L. DeLeon Ardis, BYU professor of archaeology, is on a church expedition to try to find the Lost City of Zarahemla. As Zarahemla’s exact location is being radioed to church headquarters, communication is interrupted. Church leaders suspect foul play. Moroni Smith, Orrin Porter Rockwell VII and Gadget Gunderson, of the Church Special Projects division, are sent to discover the fate of the Ardis expedition.

Shot down as they approach the area, the trio push through the jungle and find the city still intact, with descendants of the Nephites struggling for their freedom.

As they fight to protect the city and its people from the evil Reverend Maximus Deil, leader of the anti-Mormon group, The Unity, they are repeatedly confronted with ominous challenges. They fight their way out of massive jungle fires, escape from dark dungeon traps, are spared from death by fire at the stake, and even manage to escape the ancient mighty mammoth beast, the curelom! They find the stone the brother of Jared used to light his way across the waters to the Promised Land. But only Moroni can control the righteous power of the stone and protect the ancient City of Zarahemla and its people from the evil Unity forces and their wicked philosophies.
The challenges come fast and furious in this exciting book, and every chapter is a “cliff-hanger.” This is teen action and adventure writing at its best–a book you can’t put down until the final page!
Reading Level 5+ to adult

ONE:
How it All Began

I moved toward the cockpit when the pilot called out the coordinates. The ship’s other two passengers, Orrin Porter Rockwell VII and Gadget Gunderson, joined me in the cramped quarters. From there we got our first good view of the countryside since entering the skies of Mesoamerica.
I can best describe it in three words: green, green, and green. I never saw so much green. We were in the Torrid Zone where rain was common; everything would either be green or water-logged. And the foliage! I saw trees of all sizes and descriptions, plants that hugged the bases of huge trunks, and green grass wherever the ground was level enough to allow for a verdant carpet.
There were mountains almost everywhere. And where there weren’t mountains, there were valleys rising swiftly to become mountains. The sky was the most clear blue I had ever seen. Certainly bluer than any American sky, polluted as they are.
My companions were as much in awe as I was. No words were possible to describe the wonder, the amazement, the sheer size of what lay under us.
I looked over at my friend, Port. He certainly resembled his famous ancestor, Joseph Smith’s bodyguard. Like the original Porter Rockwell, he was tall, wiry, and he had a light complexion and strong cheekbones. And eyes that were a fierce, transparent blue –- eyes that were riveted to the sight below him.
Port was along because of his physical strength and his sheer native cussedness. I used him on all my missions for Special Projects. He’s gotten me out of more jams than I’d care to talk about.
Next to him was Gadget Gunderson, our electronics expert. Strapped to her shoulder was her lap-size portable computer. I’ve forgotten its official name–we call it the Urim and Thummim (UT for short) because it’s a rather sophisticated pile of microchips for its size. Many times Gadget’s ability to coax information out of UT has saved our skins. She’s a smart woman, but with her face glued to the cockpit, she looked all the world like a little girl on Christmas morning.
And I’m Moroni Smith, more or less the leader of this group I just described. I’m here because I said “Yes” when they asked me to do it. “They” of course, are the First Presidency. Which leads me to Special Projects.
Go into the Church Office Building in Salt Lake City, Utah, and try to find Church Special Projects on the directory in the lobby. You won’t. Ask the guy at the information desk, and he’ll tell you there’s no such organization. And he won’t be lying. As far as he knows, Special Projects doesn’t exist. No one but the First Presidency knows about us. Special Projects is a super-secret organization within The Church of Jesus Christ of Latter-day Saints. Our mission statement is to “defend the Church at home and abroad from its avowed enemies.”
Doctrinally, of course, the Church doesn’t need defending. Our leaders have counseled us not to argue with anti-Mormons. Let them publish their scurrilous tracts; let them produce their anti-Mormon movies. Everybody is aware of these kinds of organizations.
But there is a small but powerful group of people who aren’t content with just writing bad things about the Church. They fight what they perceive as the battle for truth on more literal battlefields. That’s why Special Projects exists: when the life and limb or property of the Church and its members are threatened, we’re called into action. We’re supposed to avoid violence if possible but to end the threat at all costs.
So what possible threat could exist for the Church in the jungles of Mesoamerica?
MORE CONTENT UNTIL THE END OF THE CHAPTER:
Gadget was still talking. “This plane is equipped with a device that’s constantly monitoring the ground below. I’ve programmed the automatic pilot to scan back and find that clearing we passed over and to land the plane there.”
I screamed, “How did you know this plane could do that?”
Gadget shrugged. “I don’t. But do you have any better ideas?”
I didn’t. Well, actually, I did. I prayed fervently that Gadget’s plan would work.
But I prayed with my eyes open, for the returning helicopter was now large in the cockpit window. If its pilot decided to pepper us with bullets again, no amount of sophisticated computer equipment or prayer would save us!

Moroni Smith In the Land of Zarahemla by Thom Duncan

First Edition — Reviewed by Scott Parkin for The Association for Mormon Letters
On 7/8/1997
“There is an entire subgenre of Mormon fiction dedicated to fantastic stories centered around Book of Mormon lands and peoples. While Chris Heimerdinger’s Tennis Shoes books are the best known, there are a number of other books in the category. List member Thom Duncan has written at least one in Moroni Smith in the Land of Zarahemla.
The book revolves around an expedition to Central America led by a BYU professor who disappears without a trace after only a few days. The Church Special Projects Division, led by Moroni Smith (no relation) and populated by Orrin Porter Rockwell VII (direct descendent) and tech-wizard Gadget Gunderson, is called in to do a low-profile search and rescue. The original expedition had found evidence that the ancient Book of Mormon city of Zarahemla might still exist somewhere in the jungle, but transmissions were cut off abruptly before the location of the city was pinpointed.
The story follows Moroni Smith and friends as they go to Central America to find the lost expedition. Like Indiana Jones, Moroni Smith and crew deal with those who would either conceal or control the powers granted to men by god. When they are forced to crash land in the jungle by followers of the noted anti-Mormon crusader, Reverend Deil, the chase is on through the ruins of ancient civilizations and into the heart of the city of Zarahemla itself.
The book is a fun, adventurous romp through Book of Mormon landscapes, and was an entertaining read. Each chapter ends on a mini cliff-hanger and the movement is quick, the action non-stop, and the Mormon in-jokes and artifacts in strong abundance. It is written for a young adult audience, but it goes straight at a number of issues, including questions of faith and proof, proper use of power and authority (including the priesthood), and responsibility to the truth. An enjoyable read.
Unlike Chris Heimerdinger’s books, Moroni Smith in the Land of Zarahemla did not enjoy widespread success with Mormon YA audiences…
This is a fun story that deserved better attention than it got. Sure, I have a few quibbles, but I have quibbles with everything I read. And in this particular case, it was quibbles of philosophy, not craft. If you can find a copy, read it. It’s a good clean romp with its tongue planted firmly in cheek, but that still manages to raise some real issues of spirituality, proof of the divine, and human nature.”

You can purchase this book from: 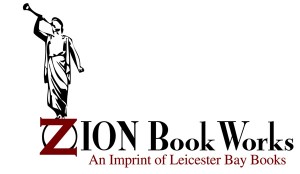